Stiga Evolution vs Stiga Pro Carbon (Which Is Better?)

Out of all ping pong paddles out there on the market, both the Stiga Evolution and the Stiga Pro Carbon are some of the most popular ones, meaning they are often compared together.

Both the Evolution model as well as the Pro Carbon model are incredibly high-quality; however, the main difference between them is that they are built for two different styles of play, so we recommended figuring out what kind of ping pong player you are before reading this guide, as it will help you understand which one is the best for you. Already know what kind of table tennis player you are? Then let’s get started! 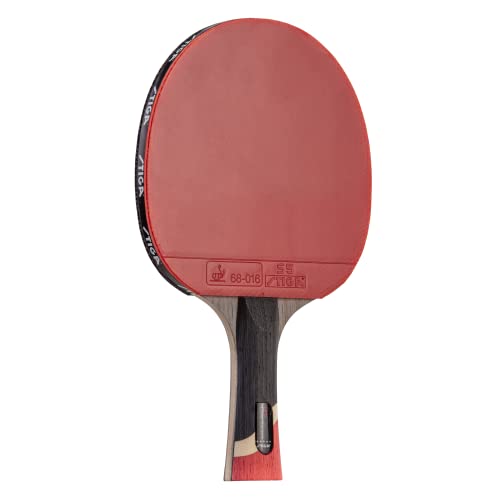 Specifications Of The STIGA Evolution

Specifications Of The STIGA Pro Carbon

What Is The Blade Like On The Stiga Evolution?

The Stiga Evolution features a build of six piles of wood. This means that it is a fairly lightweight blade that is designed for long-term play and decreased fatigue from playing with a heavy paddle for several hours. While it is lightweight, it is also quite a sturdy product so you can be sure it will not fall apart after long use. Other than its sturdiness and weight, there is not much else very special about the blade on the Stiga Evolution.

What Is The Blade Like On The Stiga Pro Carbon?

The Stiga Pro Carbon is built with five piles of balsa wood put together with an extra layer of carbon on both sides, meaning that the total pile count ends at seven. The added carbon layers make sure that the blade remains lightweight and easy for long-term use. The seven layers also give you quite a solid surface to work with, which will mean you will have increased speed in all of your shots.

What this means is that the Stiga Pro Carbon is much more suitable for offensive players. This specially designed paddle is also able to harness the reverb effect of the shots fired at you and add them to your return stroke as reinforcements. When compared to the Stiga Evolution, you can see that the only real difference is this – that it is designed for more offensive play. Other than that, they are both sturdy and lightweight and absolutely great.

What Is The Rubber Like On The Stiga Evolution?

They also allow for you to conserve the reverberations coming from your opponent’s shots because they’re dispersed through Stiga’s Shock Dispersion Tube technology (in the handle of the paddle). The Stiga Evolution is designed to generate more spin as well as more precision than the Stiga Pro Carbon.

What Is The Rubber Like On The Stiga Pro Carbon?

The Stiga Pro Carbon features a different kind of rubber technology which is known as the Stiga S5. This means that it is lined with a 2mm thick beginner-grade rubber that makes it easier for you to control your shots. It also eases the outputs so the speed of your paddle, as well as the mechanical spin, will be regulated.

What Is The Handle Like On The Stiga Evolution?

The Stiga Evolution, as mentioned above, features a Shock Dispersion Tube at the handle that collects the tension from the surface of the paddle and redistributes it to that same surface again in order to offer support for your return shots.

This means that if you choose to go with this particular paddle, you will likely have to figure out how to use the speed and spin feature in order to get the ball to tougher spots on your table, since if you are firing straight shots only, you might get the ball a bit too far and have it not hit the table or give your opponents easier return shots.

What Is The Handle Like On The Stiga Pro Carbon?

The Stiga Pro Carbon has a very different kind of handle. It features a metal rod within it that gives you an easy and solid grip. This allows for the paddle to be more balanced so it is easier to move during a ping pong game. Contrary to the handle of the Evolution, the handle of the Pro Carbon will allow you different levels of intensity that will make sure you get to do more tricky and complicated shots that require perhaps less power but more dexterity.

While both paddles are a great choice overall, we recommend the Stiga Evolution because it’s perfect for beginners or anyone looking to take their ping pong game to the next level. It boasts more speed and spin than your run-of-the-mill table tennis racket and is extremely popular within the ping pong community, not to mention being one of Stiga’s best sellers!

Bonus tip: Check out this video on how to choose a table tennis bat properly!